Back on the trail
Posted by UHP-The Inside Passage at 8:11 PM 2 comments: 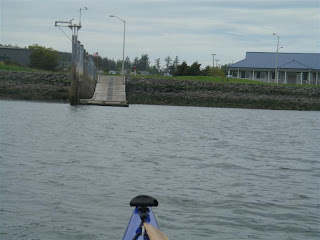 This is where Stage II of Under Human Power ended in July of 2006.
It is where I pick up the trail this year.

Posted by UHP-The Inside Passage at 8:07 PM No comments:

Posted by UHP-The Inside Passage at 8:01 PM No comments: 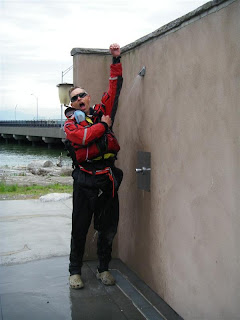 Shower Anyone?
Posted by UHP-The Inside Passage at 7:57 PM No comments: 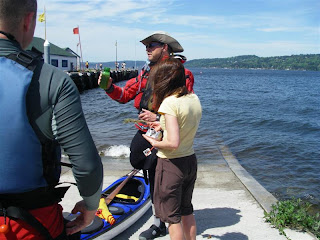 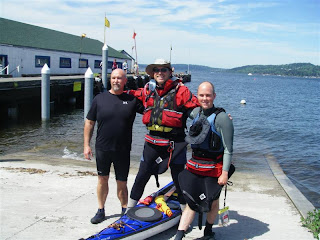 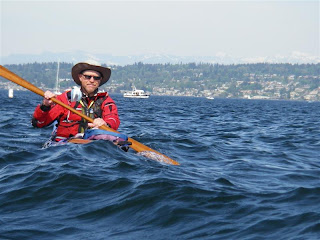 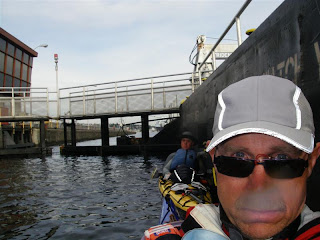 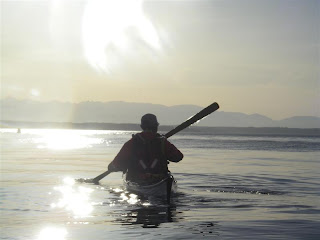 The Sea at Last - the Puget Sound 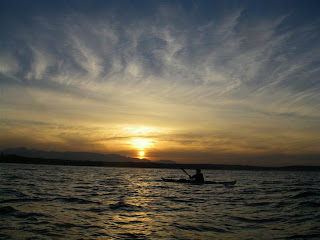 The First Sunset - Crossing the Puget Sound
Posted by UHP-The Inside Passage at 7:47 PM No comments: 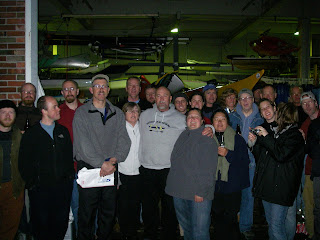 The Gang at SRK's Boat House on Lake Washington
Posted by UHP-The Inside Passage at 7:18 PM 1 comment:

On the Eve of Departure

Acute-care nursing taught Darrell Gardner, 54, a critical lesson: Don't wait to pursue your dreams. Sometimes you run out of time.

The Santa Fe resident took the lesson to heart and set out in 2004 on a multi-year adventure to solo hike, canoe and kayak from Mexico all the way to the Arctic Ocean. To date, Gardner has made an estimated 5 million steps, completing the Pacific Crest Trail and over the Cascade Mountains into Seattle. He calls the journey "Under Human Power."

On May 16 he'll begin the second half of his journey. He plans to solo kayak 1,400 miles this summer along the Inland Passage from Seattle to Skagway, Alaska. He figures it will take him two more summers to reach his final goal, where the Colville River empties into the Arctic.

"(My patients') stories are part of the reason I'm doing it and not waiting, their realization that it was too late to do what they wanted in life," Gardner said.

"You have all the extremeness of this kind of adventure, the beauty, the wildness, and there's a strong element of things that are way beyond your control," Gardner said, folding his tall, athletic frame into a seat at a local Santa Fe coffee shop. Like other people who test their bodies daily with intense physical training, he looks years younger than his age.

Gardner paid for his adventure by working as a per diem nurse at St. Vincent Regional Medical Center. He would take off three months each year to make another leg of the trip.

Gardner took two summers to hike the 2,650 mile Pacific Crest Trail. Then in 2006, he made the bridge from land to sea, trekking a hundred miles across the Cascades and paddling a collapsible canoe down the Skagit River into Puget Sound. He postponed the next step of the journey after injuring a shoulder last year.

He has since moved temporarily to Seattle, working as a nurse and training for the millions of paddle strokes he will need to propel himself across bays, open ocean and up rivers. Gardner said he hopes to make 20 miles a day, but a lot depends on Mother Nature. "The weather has total control in this environment," Gardner said.

He'll carry most of his supplies in a 17-foot fiberglass kayak. He's set up resupply spots at a couple of villages along the way by mailing supplies ahead of time.

On the Pacific Crest Trail, he didn't take a cell phone or a global positioning unit, only a map and a compass. On this part of the trip, he will have a GPS, a cell phone and a personal-locator beacon that will send a signal in case he runs into trouble. He's also testing a new locator device called a Spot beacon. At the push of a button, he can send a signal to a satellite, which will beam his location to the company. Friends and family can download his latitude and longitude via computer and track his progress daily.

Gardner will be paddling through the heart of grizzly country. He said he's not too worried. He'll just practice good bear etiquette: Keeping food out of his tent, hanging food away from camp and high up, washing cookware quickly after meals. "Grizzlies aren't interested in people. They're interested in food," Gardner said, noting the only problems are with bears habituated to humans.

He'll paddle across some channels 10 to 15 miles wide. How far he'll make it each day will be dictated by tides, currents and weather. "In some of those channels, they've documented 18-knot currents," Gardner said.

Paddling in good weather is sometimes riskier than in bad, though. In bad, roiling water, a kayaker has to stay fully focused. In quiet waters, it is easy for the mind to drift and the paddler to get turned around, he said.

Gardner is no stranger to Alaska's harsh beauty. In his early 20s, he spent a winter along the Yukon River, living alone in the bush with sled dogs. Temperatures dipped to 50 below. "I'm intimately acquainted with that part of the world, and after you spend a winter in Alaska, you are never quite the same," he said in an earlier interview.

His preparation for the adventure dates back to his youth when he learned to backpack and camp. In his 20s, he read and was inspired by Colin Fletcher's account of hiking the PCT, called The Thousand Mile Summer, but Gardner didn't think he could do it. He attended wilderness trainings and learned wilderness medicine. At 45, he became a nurse. Within a few years of working with seriously ill patients, he realized he needed to try for his dream while he still could. If his trip inspires others at all, he said, he hopes it makes them "go ahead and try for their dreams, no matter their limitations. There's still a lot to be lived."
Posted by UHP-The Inside Passage at 7:21 PM No comments: